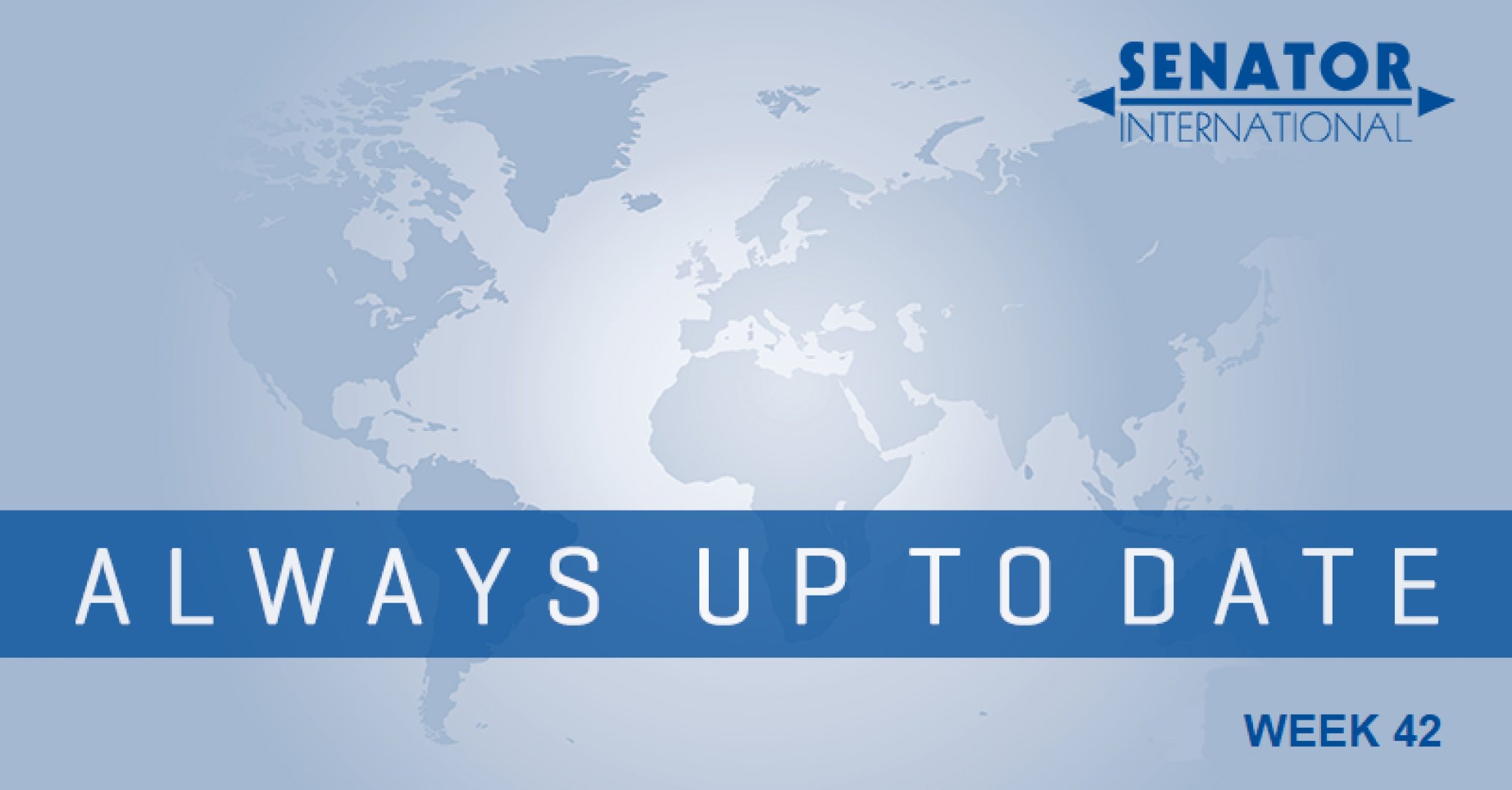 The market situation continues to be characterized by the disparity between high demand and too little available capacity. Exports from China to Europe appear relatively relaxed after the Golden Week: Stable rates, few delays. For exports from Europe to China, the situation remains tight. Due to ongoing restrictions in ground handling at Shanghai Pudong Airport (PVG) and other airports, further delays are to be expected here.

In the direction of the USA, the same picture as recently: high demand, hardly any free capacity. The "SAB" SENATOR Atlantic Bridge is a reliable option from Frankfurt (FRA) and Frankfurt-Hahn (HHN) to Greenville-Spartanburg (GSP) and Chicago-Rockford (RFD). The lifting of travel restrictions for fully vaccinated passengers announced by the U.S. government could provide change. Available cargo capacity is expected to recover somewhat due to an increased number of passenger flights with a cargo option (PAX). The opening for affected travelers from 33 countries is scheduled to take effect on November 8 (source: aircargonews.net).

At Frankfurt Airport (FRA), the ground handling situation remains critical. The changed process handling in the import customs procedure leads to significant delays for both imports and exports. Frankfurt Cargo Services (FCS) - the largest ground handling service provider - has set up a task force to speed up processing. There are still no signs of any noticeable easing. For shipments via FRA, delays must still be taken into account.

The situation remains tense worldwide. For exports from Europe to Asia, some shipping companies have reduced rates by around USD 100 per container. To Japan, on the other hand, prices remain at a high level. Background: the available equipment is needed for the China trade. In contrast, further rate increases are expected towards Australia/New Zealand and Africa.

For imports from Asia to Europe, the available equipment is mainly used in the transpacific trade between Asia and North America. As a result, there is a shortage of containers between Asia and Europe. Accordingly, high prices have to be paid for the few free spaces. Many container ships are anchored off Shanghai and Ningbo. In total, more than 240 ships are currently waiting for berths and clearance in China. There is no relief in sight by the end of the year.

For exports from Europe to North America and Mexico, the situation remains unchanged. High demand - especially to the USA - meets with few available capacities. Rates remain high. Port congestion is dramatic. Currently, more than 60 ships are waiting at anchor off Los Angeles and Long Beach. There are 28 off Savannah (Georgia). The US East Coast also continues to be noticeably affected by backlogs. Rates are also rising for Mexico at the moment. Free places are scarce. Currently, only the shipping company MSC offers space without allocation. Demand also remains high for South America, especially to the West Coast.

Equipment bottlenecks are slowing operations at major European ports. In addition, there are now disruptions to hinterland transports in Germany. At the loading terminals in Hamburg and Bremerhaven, rail handling is delayed by up to 72 hours. The high volume of freight and construction work on the rail network are responsible for this. Pre-carriage and onward carriage by inland waterway vessel in the western ports are also backed up.

The situation on the New Silk Road has changed little. For import from China to Europe, free places are rare. Rates are consistently at a high level. In addition, delays must be expected in the direction of Europe. For export from Europe to China the situation looks better: Free places are available, rates are in a stable range.

The upcoming 2022 presidential election is starting to impact the economy. Political tensions combined with the Corona crisis are causing inflation to rise. Thanks to more than 100 million vaccinated people in the country, Brazil will ease travel restrictions starting in November. Passenger flights to and from Europe and the USA will once again be possible. This should also have an impact on Air Freight. There are still not enough passenger flights with a cargo option (PAX). As a result, rates are still at a high level due to the current capacity bottlenecks.

For Ocean Freight, rates also remain high. Especially to and from LATAM, there are hardly any free slots. Shippers are asked to factor in the market situation and plan well in advance.

During the Golden Week, Ocean Freight spot rates have changed less than experts predicted. For traffic from China to Europe, short-term rates increased by a few percentage points, but not dramatically. For containers from Asia to the U.S., prices were down about 7%, according to the Baltic Index (FBX) (source: theloadstar.com).

China's economic growth was below expectations in Q3 at 5%. In the 1st and 2nd quarters, the trend was significantly higher. The previous upswing was slowed by various factors: fears regarding the Chinese real estate sector, the Chinese government's crackdown on COVID-19 outbreaks or suspected cases, and restrained consumer behavior among the population are the main reasons for the slight damper (source: dw.com).

The situation has recently normalized somewhat for Air Freight. Capacities are available on the "SAB" SENATOR Atlantic Bridge from Frankfurt (FRA) to Mexico City (MEX). For transports from China to Mexico, free slots are absolutely scarce as a result of the Golden Week. Forward planning is required.

For Ocean Freight the same picture: especially from China to Mexico free slots are hard to find. Rates are rising, especially for departures from Xiamen and Ningbo. For shipments to and from Europe, rates are more stable. Here, bookings should be made about two weeks in advance.

The Port of Cape Town has introduced a new booking system. The technology used by operator Portnet is the same as in the ports of Durban and Coega (Port Elizabeth). Due to the changeover, there have been delays at the container terminals. It is expected that the backlog will be relieved in the course of this week.

Road freight traffic between South Africa and Zimbabwe is to become more efficient. To this end, a new border station was opened in Beitbridge on October 1. However, implementation has so far proved problematic. Conditions at the border crossing continue to be chaotic in some cases. Last week, some drivers stormed the border and tried to drive up. The result: a complete traffic jam. It is still unclear when the local border authorities will get the situation under control.

The U.S. government has responded to ongoing delays at U.S. West Coast ports.  The Los Angeles-Long Beach ports are to operate around the clock indefinitely. In doing so, the Biden administration hopes to eliminate bottlenecks in the supply chain. Experts say the situation at the ports threatens the recovery of the U.S. economy after the pandemic and should be stabilized by reducing congestion (source: whitehouse.gov).

For Ocean Freight, shipping company Cosco Shipping Lines is offering a new intermodal service from China to Chicago via Canada. Specifically, cargoes can be shipped from Shanghai, Ningbo and Qingdao to the Port of Prince Rupert in British Columbia, Canada. From here, the containers are further transported to Chicago. According to Cosco, transit time totals 19 days (source: theloadstar.com).

Stay UP TO DATE with SENATOR INTERNATIONAL 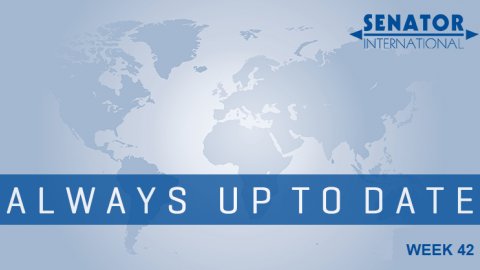